A Pizza and a Hangover: Stories Surrounding the Flu Game

On June 11, 1997, Michael Jordan, in the spotlight of the NBA Finals, had one of those performances immediately seen as one for the history books. The NBA Finals between the Utah Jazz and the Chicago Bulls was tied 2-2 after the Bulls had lost two straight in Utah. That night the 34- year old Jordan, visibly sick and weak, played 44 minutes and scored 38 points in Chicago’s Game 5 victory. The Bulls wrapped up the NBA Finals in Game 6 back in Chicago but the performance that would be remembered was the famous “Flu Game.” The quality and magnitude of Jordan’s performance has never been in question. However, after seventeen years the “Flu Game” has proven to be a misnomer by the emergence of “new” details that interestingly enough were all circulating around the game in 1997.

It only took one look to see that something was wrong with Michael Jordan when he walked onto the court for Game 5. According to reports Jordan had been too sick to attend any pre-game activities after spending the night and day throwing up. Marv Albert, the NBC play-by-play man, announced that Jordan was suffering from “flu-like” symptoms, a term used throughout the game to describe Jordan’s condition. After the game, Scottie Pippen said that prior to the game he had doubted Jordan’s ability to put on his uniform and praised his leadership. On the other side, the Jazz, in what was probably frustration, doubted he was actually sick, Bryon Russell probably expressing what all Jazz fans thought by saying, “he didn’t look sick dropping 38.” 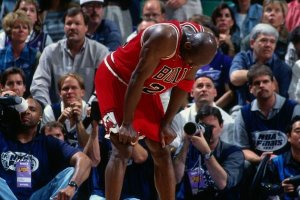 The flu narrative was written within a few hours but after the game, the Bulls’ medical staff said that Jordan suffered from a “viral stomach upset,” not the flu. In 2013 Tim Grover, Jordan’s former personal trainer, caught everyone’s attention when he claimed that the “Flu Game” was not the because of the flu at all but the result of a late night pizza consumed on the eve of Game 5 that gave Jordan food poisoning. Whether or not the implication was deliberate poisoning is open to interpretation, but the story gained a lot of attention. Was Jordan an innocent victim of bacteria-filled pepperoni, or was he poisoned by crazed Utah fans or scientists posing as pizza delivery guys? The former is entirely possible while the latter takes some imagination to believe.

“So we order a pizza, they come to deliver it, five guys come to deliver this pizza. And I’m just … I take the pizza, and I tell them, I said, ‘I got a bad feeling about this.’ I said, ‘I just got a bad feeling about this.’ Out of everybody in the room, he was the only one that ate. Nobody else … then 2 o’clock in the morning, I get a call to my room. I come to the room, he’s curled up, he’s curled up in the fetal position. We’re looking at him. We’re finding the team physician at that time. And immediately I said, ‘It’s food poisoning.’ Guaranteed. Not the flu.” -Tim Grover, Chicago Sun Times April 18, 2013

I could not find any references to food poisoning before the 2013 story but at the time it was widely reported that Jordan had eaten a bad pizza prior to Game 5. Three articles (Here, Here, and Here) published in the Chicago Tribune on June 12, 1997 make references to both food poisoning and bad pizza as the culprit, and in 2012 Phil Jackson said in an interview that Ron Harper always believed it was bad food that caused Jordan’s illness. In fact, the NBC crew during the game appears to be the only people to use the word flu to describe Jordan’s condition.

Or perhaps the wound was self-inflicted since lurking behind the official explanations is the unattracive rumor that Jordan was hungover during Game 5, the consequence of a long night of gambling and drinking. The first time I heard this version was from Jalen Rose in 2013 when he told the tale while at a college party in Indiana and also in this Grantland video.  Though the hangover theory never gained much traction as an explanation for Jordan’s ailment, the stories were present in 1997. Michael Jordan was known for his ability to perform at a high level after little rest and often gambled or played cards late at night. For example, in 1993 he gambled in Atlantic City prior to Game 2 of the Eastern Conference Finals. Considering his lifestyle its quite plausible that the combo of a late night with bad food and alcohol made him ill.

“We just took it at face value that he had the flu and just went ahead and played. But according to the stories and rumors, he was supposedly at Robert Redford’s chalet up in the Utah mountains playing poker all night and partying too hard.” -Matt Guokas in Michael Jordan: The Life by Roland Lazenby

We may never know what was actually wrong with Michael Jordan and in truth, it probably doesn’t matter because what we saw was spectacular: a visibly ailing man defying his body and on will alone leading his team to the pivotal win in the NBA Finals. Was Jordan actually stricken with a virus? Was he poisoned either by a wicked twist of fate or on purpose? Or was he hungover and, like many college students, just had to go to work the next day? Pizzas, conspiracies, and booze aside, one cannot argue with the results because regardless of what actually happened, the job got done.

This is the third article in a series of Bulls stories from their six finals appearances in the 1990s. If any readers would like to make suggestions for a story to be a part of this series leave it in the comments.